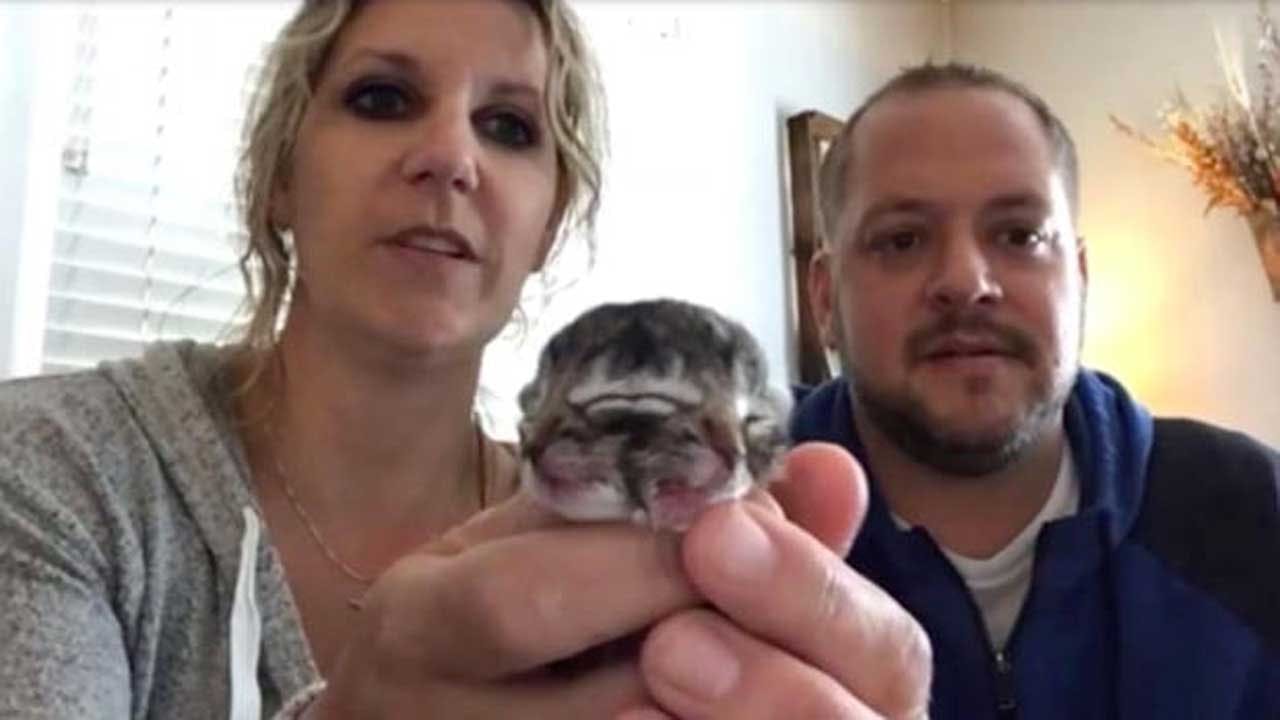 When Kyla King's cat gave birth on her Oregon farm on Wednesday, she found four tiny, newborn kittens in the litter. But then King saw two others hiding behind heir mother —and one was much different than all the others. The kitten had two tiny noses, four eyes tightly shut and two mewling mouths.

While the two-faced cat is an unusual phenomenon, it is not unheard of, CBS affiliate KOIN reports. These are known as Janus cats, after the Roman god Janus, who was often depicted with two faces in mythology.

Janus cats have a rare congenital defect called disprosopus, or cranial duplication, and most don't live longer than a day. But one Janus cat is known to have defied the odds: a cat named Frank and Louie lived 15 years until he died in 2014. He was named the world's longest surviving Janus cat by the The Guinness Book of World Records, according to KOIN.

The King family doesn't know how long they'll have with their Janus cat, but they told KOIN their unusual kitten appears to be doing well.

They decided to name the two-faced kitten Biscuits and Gravy — or just Biscuit for short.

Kyla King reached out to their vet and learned there wasn't much to be done medically for the kitten — all they can do is make it comfortable and help it eat. King said she bottle-feeds the cat and keeps it warm by tucking it into her shirt.

The kitten even sleeps with King through the night in a separate room because her husband is allergic to cats.

"It doesn't really know how to nurse properly because it has two mouths so I've been trying to feed it," she told the station. "And, I mean, I'm gonna do the best I can, but these animals don't usually live too long."

"We're not super optimistic but it does seem pretty lively and has an appetite and seems to be doing pretty well," BJ King added.

Biscuit is smaller than the others in the litter, so could be the runt, the family said. While it might seem like the outcast of the bunch, the family shared photos on Facebook, where it gained widespread attention.

At just a few days old, Biscuit has already showed off a special talent: meowing and eating at the same time. "Meow out of one mouth and eat out of the other," BJ King said.

The family says while they've had many requests from people who want to adopt the special kitten, they plan on keeping it. They say they want to enjoy whatever time they have with Biscuit.